Mr.Hariharan Sriram from the 2017-22 batch to assist Mr. Anubhab Sarkar, Founder of Triumvir Law, Bangalore in writing a book on International Environmental Law

Mr. Anubhab Sarkar completed his graduation in law from School of Law, KIIT University, Bhubaneshwar and worked as research assistant to Prof. Martin Hunter in the UK who is an authority in the field of International Commercial Arbitration. He also worked with the Corporate Law team of Cyril Amarchand Mangaldas & Co., Mumbai.

Mr. Sarkar practices in Corporate Commercial and Foreign Investment Laws. He has been involved in corporate transactions focused on the technology industry including cross- border Mergers & Acquisitions. He has also assisted in conducting due diligence exercises for companies across the IT, ITES, E-commerce and pharmaceutical sectors. He actively works with various regulatory bodies including the Reserve Bank of India and the Foreign Investment Promotion Board. He has been involved in the drafting and review of various commercial contracts and has experience in providing general advice on Foreign Direct Investment and cross border matters.

Prior to this, Mr. Sarkar was involved in project finance transactions involving both domestic lending as well as foreign lending and had been involved in drafting, negotiating and finalising finance and security documents as the Lenders legal counsel.

Mr. Sarkar was invited by the CENTRE FOR ENVIRONMENTAL LEGAL STUDIES, RAJIV GANDHI NATIONAL UNIVERSITY OF LAW (RGNUL), Patiala and was commissioned to write a book on International Environmental Law which is slated to be published in 2019. Mr Sarkar who was at IFIM campus to deliver the inaugural lecture of the IFIM Law School Centre for Excellence in International Law and Human Rights (CEILHR) selected Mr. Hariharan Sriram as his paid research assistant to work on the book. On successful completion of the book project, Mr. Sarkar has also promised a permanent job to Hariharan at his office in Bangalore which is known as TRIUMVIR LAW ASSOCIATES.

The paid research assistantship secured by Hariharan will be for a period of one year from July 2018- July 2019. 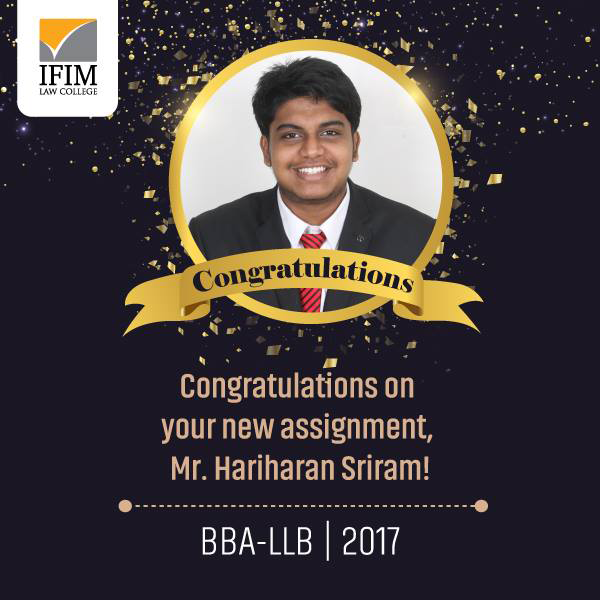